I ran two circuits that should both give the same results: the first, shown below, is a Hadamard gate followed by a CNOT, followed by two rotations along the Z axis. 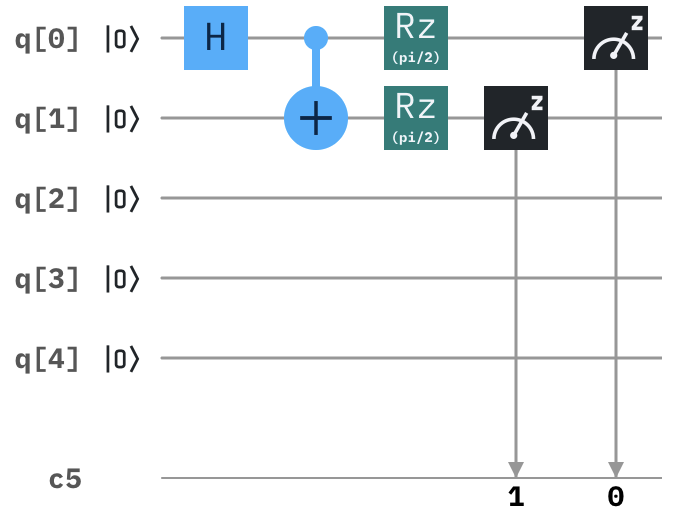 The Hadamard followed by the CNOT is the easiest way to entangle two photons: the Hadamard gate puts the first qubit in a superposition between |0> and |1>, with a probability amplitude of 1/sqrt(2) and the CNOT flips the second qubit so it’s entangled with the first one. The Rz gate effectively doesn’t do anything to the end result, but I used it to see if more operations (even effective no-ops) added more errors.

My second circuit, shown below, is identical except for the unneeded Rz gate: 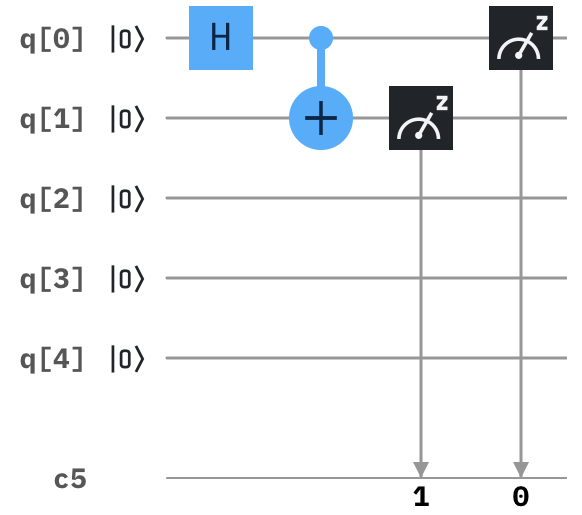 Both circuits should have a 50% chance of outputting two zeroes and a 50% chance of outputting two ones, but should never output anything else. On the simulator, this is pretty much what happened: I had a 49.023% chance of two zeroes and a 50.977% chance of two ones. The 0.977% error can be attributed to the pseudo random number generator used by the simulator, and rounding errors on the classical computer it runs on. Each circuit was run 1024 times on each computer used.

The simulator was the closest to the theoretically expected results, with a 0.977% error and no unexpected results. This shows that the quantum circuit should behave as expected, within some margin of random noise.

Quantum computer 2 had the biggest error, with a total of 5.567% of completely unexpected results, and more |11>s and fewer |00>s than expected. I didn’t run circuit 1, with the extra gate, on this computer.

Adding the Rz gate appears to introduce more errors: with the extra gate in place, 2.832% of the results were unexpected.

Removing the Rz gate reduced the unexpected results to 2.149%, but also increased the over-shoot of |11>s to 4.688% more than expected.

Perhaps this model of quantum computer has a preference for |1>s?