The TL;DR:
This is one of those "recipe" posts that tend to be useful if you happen to want to do exactly what I just did. The end result of this one is a Windows shortcut called "Linux terminal" on the desktop, that opens up an SSH terminal to a Linux box, with X forwarding.

For my day-to-day work I, like many people, use a mix of Linux, Windows and iOS; the three of which working less-than-seamlessly together to help make my working day productive. In my case, the Linux boxes are mostly Ubuntu boxes (I moved from vanilla Debian to Ubuntu a few years ago; from RedHat to Debian before that) and the Windows boxes are either a Windows 7 desktop, a Windows 7 laptop or a Windows 10 laptop.

Now, I have a bit of work to do on the Linux box and it has fewer screens than the Windows desktop box – and is less of a carry-me-around than the two laptops, so I decided to resurrect the ol’ X-over-SSH thing. I tried Putty and Xming first, but Xming is no longer free, and Putty had some trouble getting that to work with the old, free version of Xming. I have used Cygwin for any years and it has its own X server, so I decided to use that in stead.

In this post, I won’t go through all the steps I tried that didn’t work from all the various websites I visited to troubleshoot my setup. In stead, I’ll just give you the recipe that did work – the one I’m working with now.

I already had Cygwin installed when I started, but you might not, so here’s what you do: 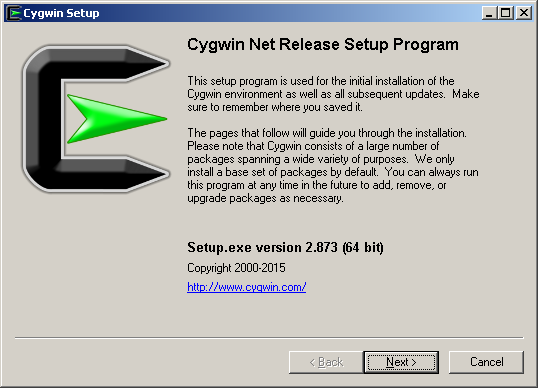 The easiest way to do this is to type the package name in the Search box, and click on the word “Skip” until it says “7.5-2” or somesuch (whatever the current version is – just click on “Skip” and it’ll work

If this part is confusing to you, look here for an explanation with more screenshots and hand-holding.

First thing is to run the terminal. The Cygwin installation will have created a Start menu item called “Cygwin64 terminal” (or “Cygwin Terminal”). Click on that and a command prompt will open.

Let’s assume your Linux box is at 192.168.0.80 and your login on the box is “me”. On your Windows box, we’ll assume the same thing (you’re called “me”), so in the following, substitute your login for “me” and whatever names you have your computers for “George” (the Windows box) and “Tux” (the Linux box). When you start the Cygwin terminal, you should see something like this:

First thing we’ll do is create a public key to log into the Linux box:

(that is: type ssh-keygen and hit Enter a few times until it’s done).

Now, send the public key over to the Ubuntu box:

It will ask you for your password – this time. We’ll make sure it’s the last time:

The last line is in case the authorized_keys file was created by the first, in which case it will most likely not have the right permissions set.

Find where it says “X11Forwarding” and check that the following settings all concur:

I also have the following:

which means ssh doesn’t time out when I go get a coffee.

We’re all done on the Linux side: assuming you have something that uses X on the box, the Linux end of things will be able to run it over SSH. Now for Cygwin.

Setting up the Windows box

We’ll start by making sure the X server starts when you log in: create a shortcut with the following target: C:\cygwin64\bin\run.exe -p /usr/X11R6/bin XWin -listen tcp -multiwindow -clipboard -silent-dup-error and put it in the Startup folder of your start menu. 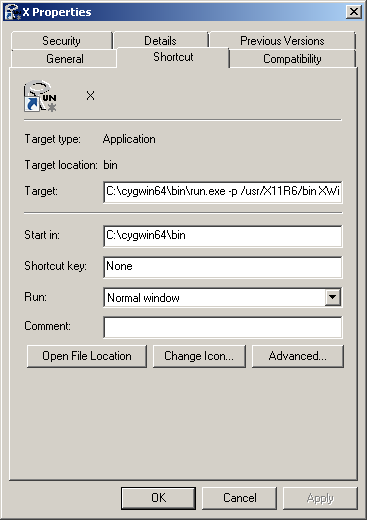 Run it. You should get a little X logo in the system bar.

Now, we’ll need a DISPLAY environment variable to point to our X server, which we can add by right-clicking on “Computer”, selecting “Properties”, “Advanced system settings” and pressing the button “Environment Variables…”. Add it to your user variables can give it the value :0. This will tell SSH (and, ultimately, the Linux box) where your X server is. 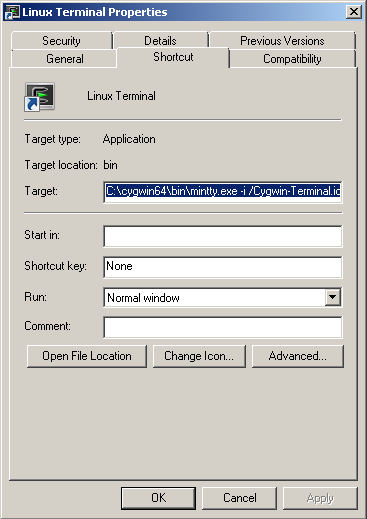